The penultimate night of Popcorn Frights went back in time with two movies set in the past, one filled with Argento-esque retro '70s glamour and the other a micro-budget throwback to classic Universal monsters by a local theater troupe.

Up first, proof that A24 knows damn well at this point what its brand is among horror fans...

Rated R for strong sexual content including a scene of aberrant behavior, and some bloody images 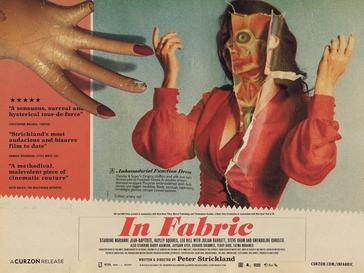 
In Fabric is pure style over substance... but holy hell, was it stylish! It knows that you can't really take its premise -- a supernatural horror film about a red dress that kills the people who wear it -- seriously, so instead, it plays it for all the camp and flashy spectacle it could bring to bear. The plot is incredibly flimsy, abandoning nearly everything halfway through in order to focus on a new cast of characters; everything that worked about this film came down to the direction and the actors, who managed to spin a movie that should not have worked into a trippy, beautiful, creepy, campy, and darkly comedic throwback to the "prestige horror" of the '70s. It's not at all interested in narrative cohesion, but it definitely put me in the right mood.

We start with Sheila Woodchapel, a recently divorced bank teller in '70s England who is raising a teenage son named Vince, an aspiring artist dating a model named Gwen. Sheila wants to start dating again, but all of her nice clothes are old and ragged, so she heads to Dentley & Soper's, a department store that runs some really weird ads on television. The clerk there, Miss Luckmoore, points her to a beautiful red dress that fits her perfectly despite it not being precisely her size, and she wears it to a date with a man named Adonis who turns out to be an utter boor. That disappointment turns out to be the start of her problems: she notices a strange rash on her chest after she takes off the dress, the washing machine goes haywire when she throws it in, a dog viciously attacks her in order to tear her dress, and when she isn't looking, it seems to be moving around.

I can't give away much more, except to say that the film suddenly, and rather abruptly, switches gears about an hour into its two-hour runtime. There isn't one story here so much as there are two, with the dress and Miss Luckmoore being the only common denominators in both of them, and honestly, the switch utterly breaks the flow of the movie. The film, after an hour of solid buildup and scares, seemed to be getting ready for a killer third act, only to suddenly turn to the audience and say "and now, for something completely different". After how much I'd gotten invested in the characters, I felt a bit cheated. I get that a lot of the films that this is homaging were less interested in making sense than in pulling viewers into their surreal worlds, but many of them had coherent stories. Suspiria was, from start to finish, about a young dancer finding out that her school is run by witches and trying to escape. Many Italian gialli were murder mysteries that followed more-or-less traditional form as we would recognize it, especially given how they influenced many modern thrillers and horror movies. Here, however, it often felt like the film was trying to pull off something that it couldn't quite manage. The two stories should've been linked together more cleanly, perhaps with the male lead in the second half of the film being introduced in the first half (he's a washing machine repairman, so a particular scene in the first half would've been a great way to involve him in the story early) and the characters from the first half getting entangled with his story in the second. As it stands, this literally feels like two films bolted together, like writer/director Peter Strickland had two great ideas for where to take the story but couldn't decide which one to use.

Visually, however, Strickland was absolutely on point here. It's never explicitly stated what year the film is set in, but in its own weird way, that only helps this movie feel like it had been made in the '70s and then rediscovered today. The bleak atmosphere of '70s England, from the drudgery of Sheila's day job to the people huddled outside the department store before it opens, contrast with everything about the villains, for whom their department store is almost like a temple to some Satanic evil. Gwendoline Christie's Miss Luckmoore serves as the human(?) face of Dentley & Soper's and the main thread holding this film together, as she lures people to their deaths with a dress that may or may not be haunted by the ghost of the woman who modeled it in their magazine -- or by some other, more sinister force. Everything has a heightened, almost comic feel, Miss Luckmoore's mannerisms as a clerk barely concealing the campy, evil witch that comes out after hours, and the clerks' greetings to shoppers being the sort of creepy-ass thing that nowadays shows up in YouTube videos highlighting the kind of '70s kitsch that would unintentionally scare people off today if it were presented seriously. The cast is uniformly excellent, led by Marianne Jean-Baptiste as Sheila, a single mother frustrated with both her asshole bosses and her son's new girlfriend who leaves the house a sty, while also looking for love herself. Jean-Baptiste made for an extremely compelling heroine, making me that much more disappointed that she was abruptly pushed to the side halfway through.

Don't let the average score fool you: while this film undoubtedly has major, near-crippling problems, the things that work about it are absolutely magnificent. While it may be "off" compared to some of A24's other recent horror releases, it's not for lack of trying. I still highly recommend it.

The second film was some locally-grown, fresh-squeezed Florida horror from some people I'd met in person multiple times, both at past Popcorn Frights events and at their theater last Halloween. 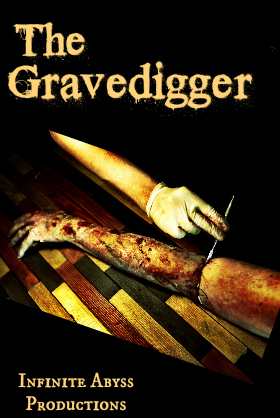 The Gravedigger was made by Infinite Abyss Productions, a theater troupe based in Wilton Manors, Florida specializing in independent horror productions. IMDb tells me that the budget was $35,000, and it shows: there are only four actors and a small handful of sets, all of them looking like they'd been built inside their theater, and the lighting is often pretty poor. And absolutely none of that obscures the obvious passion that went into this, nor -- most importantly -- the fact that they managed to pull off what many other indie horror filmmakers do with several dozen times the money they had. Buoyed by an excellent cast playing four interesting characters, The Gravedigger played to a packed house of Infinite Abyss' fans, and served as one more reason why I also consider myself a fan of them.

Inspired by the Frankenstein story and adapted from one of Infinite Abyss' stage plays, this film starts out with its titular protagonist, the aging gravedigger Kurt Volker, discovering what appears to be a badly wounded man dumped in an open grave in his cemetery. As he's growing old, Kurt takes this man in so that he can have some help at his job, and gives him the name Anton upon finding out that he has no memory of who he was. The core of the film is the relationship between Kurt and Anton, two guys who slowly grow to trust each other and eventually become friends, forging a bro-mantic relationship that's often funny, often sweet, and always compelling. Anton is more like the monster that Mary Shelley wrote, an intelligent man who is interested in finding his place in the world but has never had anybody to guide him, at least before he met Anton, who imparts his life experiences and helps him develop, for lack of a better word, a soul. He falls for a Romani woman named Nadya who had been cast out of her tribe, and seeks to perhaps forge a relationship with her. However, Dr. Victor Frankenstein, Anton's creator (who Kurt had unknowingly helped by delivering him body parts), has seen the damage that his experiment did, and will stop at nothing to take him out. The dynamic between these characters always felt real, thanks in no small part to some excellent actors whose only real fault was their uneven German accents (especially on Nadya, who at times dropped hers completely). I believed that Anton was confounded by his status as a very abnormal man, that Kurt had a lifetime of wisdom to share with Anton, that Nadya was struggling to survive and looking to find an escape with Anton, and that Dr. Frankenstein had grown so blinded by his hatred of the creature that he no longer cared about the people he hurt in the process of chasing it. The cast was 90% of the film, and there wasn't a weak link. Add a haunting score and some subtext about how we treat people who are different, and this movie had its claws in me deep.

As noted, this was originally a stage play, and in many ways it feels like it. Erynn Dalton, the owner and director of Infinite Abyss making her feature film directorial debut here, largely directs this as she would a stage production. I don't blame her given her background in theater, especially given the excellent handle she had on her cast, but this isn't a film you watch because it necessarily looks good. There are no swooping shots or big camera movements; just establishing shots (the Everglades under moonlight standing in for Germany) and a focus on the actors that makes them and their performances the most important things on screen, allowing the film's best qualities to come to the fore. However, while Dalton's direction serves the story very well, making it feel that much more like a throwback to the classic Universal monster movies that clearly inspired it, I found it harder to forgive one particular technical fault that showed up throughout the film: the lighting. To put it simply, lighting a film is very different from lighting a stage play. Many scenes were very dark, with it seeming like they only had a few proper lights with which to really illuminate the set, relying on candlelight for a lot of it. I get realism (much of the film is set at night and they didn't have electric lights in 19th century Bavaria), and I get the spooky atmosphere that they were going for, but there is a limit, and that is the point where I have to squint. At least some day-for-night trickery would've been helpful.

Even with its low budget being obvious in some regards, this was still a standout effort from some local entertainers who I'm happy to support, one that has me interested to see what this crew could pull off with some real money. Worth seeking out.
Posted by Kevin R. at 6:16 PM