Sorry it's been a while since my last review; that's what happens when you have the first test of the semester in an algebra course that you're retaking. (I got an 81 on it; studying and paying more attention to silly mistakes paid off!) In keeping with the spirit of the Valentine's Day weekend, I've decided to review a film themed around the holiday -- and because I'd rather be spit-roasted than have to watch Garry Marshall's Valentine's Day, I'm reviewing a film from the opposite end of the spectrum... Taking a break from the award-bait movies and rom-coms to review something that's been in my collection for a while, but which, for some reason, I've held out on watching until now.
Stake Land (2010) 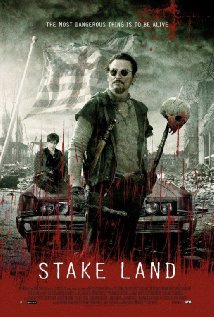 Why are R-rated action movies flopping?

Why are R-rated action movies flopping?

I have not yet seen The Last Stand, the film that has been marketed as Arnold Schwarzenegger's return to headlining action movies after a decade-long retirement from acting and a stint as the Governator of Kal-E-Fourn-Ya. Nor have I seen Bullet to the Head, the latest Sylvester Stallone action vehicle in which he stretches himself by playing a hitman out to avenge his partner-in-crime's death. However, I do understand that they hit like neutron bombs at the box office, with The Last Stand making only $7.2 million over the four-day MLK weekend on a budget of $30-45 million, and Bullet to the Head bowing to a pitiful $4.5 million over Super Bowl weekend with $55 million invested in it. Similarly, last year Dredd failed to recoup its $45 million budget despite excellent reviews and word-of-mouth.

More after the jump.

So, after a lukewarm Super Bowl (if it ain't the Giants or the Packers, I don't care), here's my review of the film I saw Saturday afternoon.