Yep. It's that time of the year again. We're going back to Popcorn Frights for another rodeo... and going by the program, this one is a doozy.

On the first night, though, they're only showing one movie. The calm before the storm...

Rated R for horror violence/gore, and language throughout 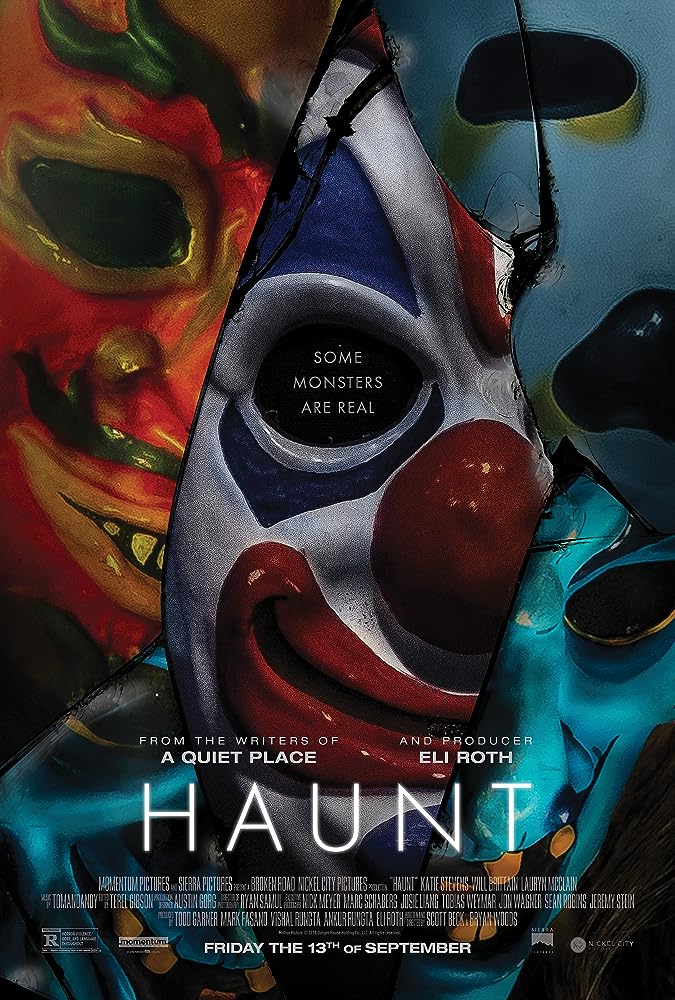 The first movie on the docket is a big one. Coming from Scott Beck and Bryan Woods, the writers of A Quiet Place, one of the most successful horror movies of the last few years (and a movie that I still, for whatever reason, have not yet seen), it's among the most notable premieres of the entire festival, at least in terms of the people behind it. It's got a premise that, while not wholly original (both The Houses October Built and Hell Fest have done something like it), still offers a lot of room for creativity. And that is more or less what Haunt offered. It's not an original film, and it's not a particularly deep one, but it does well at what it sets out to do: serve up a violent "dead teenager movie" with some nifty visuals, solid production values, and a premise that anybody who's ever been to a haunted house around Halloween has probably thought of and wished they made a movie about.

The plot is simple: a group of college friends decide to head out to an "extreme" haunted house, promising a more harrowing and horrifying experience than usual, complete with waivers to be signed and scareactors who are allowed to touch the guests. Once they get there, surprise! It turns out the place is run by evil people who want to kill them. The first act does a great job setting the ground rules, sending the characters through the house with ominous signs all over the place that something is up, but all of which could be chalked up to the conceit that the people here are willing to go the extra mile to give their guests their money's worth. A spider-filled maze turns out to have some real spiders in it rather than just fake ones. Some kind of oil or resin coats the walls in one room. A very convincing-looking performance is put on in which a young woman is brutally murdered. Then, of course, the shit hits the fan and people start dying for real, starting with the most disposable of the bunch, those who'd received the least focus up until that point.

If you've seen a slasher movie, you know how this is gonna play out: the protagonists are whittled down one by one as they fight to escape, before a hardened survivor (and maybe some of her friends -- and it's usually a her) takes the fight to the villains. I don't mind formula when it's done well, and that is certainly the case here. Beck and Woods make great use of both the environment and the costumes of the haunted house's staff, all of which evoke classic Halloween costumes to great effect and turn out to be hiding some really freaky stuff underneath; it's never explicitly stated what the bad guys' deal is, but going by the heavy body modification they've all done on their faces, a number of ideas, not all of them mutually exclusive (circus performers? S&M fetishists?), will come to mind. The first act sets up the geography of the haunted house so that we know where the main characters are and the route they should be taking in order to get out -- but always with the question of what lays further down the maze. And when people start dying, the film hides a lot of the worst gore but shows or otherwise insinuates just enough that it feels painful, as befitting a film produced by Eli Roth. The cast were all solid, especially Katie Stevens as Harper, a heroine who doesn't get a lot to say but does get a lot to do as she fights for survival, culminating in a killer ending in which she well and truly turns the tables on the people who killed her friends.

The real Achilles' heel keeping this film from rising above just "good" is a screenplay that's just a bit too bare-bones. Harper, the protagonist, is more thinly-written than the film seems to realize; while she has a tragic backstory involving a broken home and her abusive boyfriend Sam, both of which come up in the plot, they don't really do much to drive her character outside of a few scenes. They felt like they were tacked onto her in order to make her more sympathetic, not really organic parts of her character. The handling of Sam also felt a bit questionable, as the film starts out with her using makeup to conceal a black eye she'd received at his hands, yet once he's reintroduced later on, he's shown acting like a more-or-less stand-up guy. I'd liked to have seen Sam handled in a more morally ambiguous manner than how he was ultimately depicted, given that it's indicated early on that he's not a nice guy. Have him reunite with Harper when he goes to rescue her and her friends (or when he's otherwise caught up in the haunted house), only to act like a domineering asshole who has precisely the wrong idea for getting them out, and now if Harper wants to see her and her friends survive, she needs to finally get past all the mixed feelings she has for him and dump his ass (even if it means leaving him to die a gloriously violent death) -- just as her mother tried and failed to do to get out of her own abusive relationship. Instead, it feels as though they had some good ideas for where to take Harper, but never really fleshed them out all that much, or thought that they did only to leave a character who still felt only two-dimensional. Harper still gets off better than her friends, who exist chiefly to fill various slasher movie archetypes without much to really elevate them, from the hot best friend to the hunky jock to the goofy fat guy (whose elaborate Human Centipede costume didn't work nearly as well as he'd hoped) to the ones whose sole purpose is to die.

Issues in the script keep it from really soaring, but this is still a decent Halloween-themed slasher that succeeds on the strength of its core components: namely, that it's scary and well-made and delivers on the important stuff.
Posted by Kevin R. at 10:56 PM