With the weekend behind us, Popcorn Frights has cooled down a bit; from here, there's only two movies a day. Fortunately, they still delivered quality.

First, we get a supernatural horror film with an unusual lead... 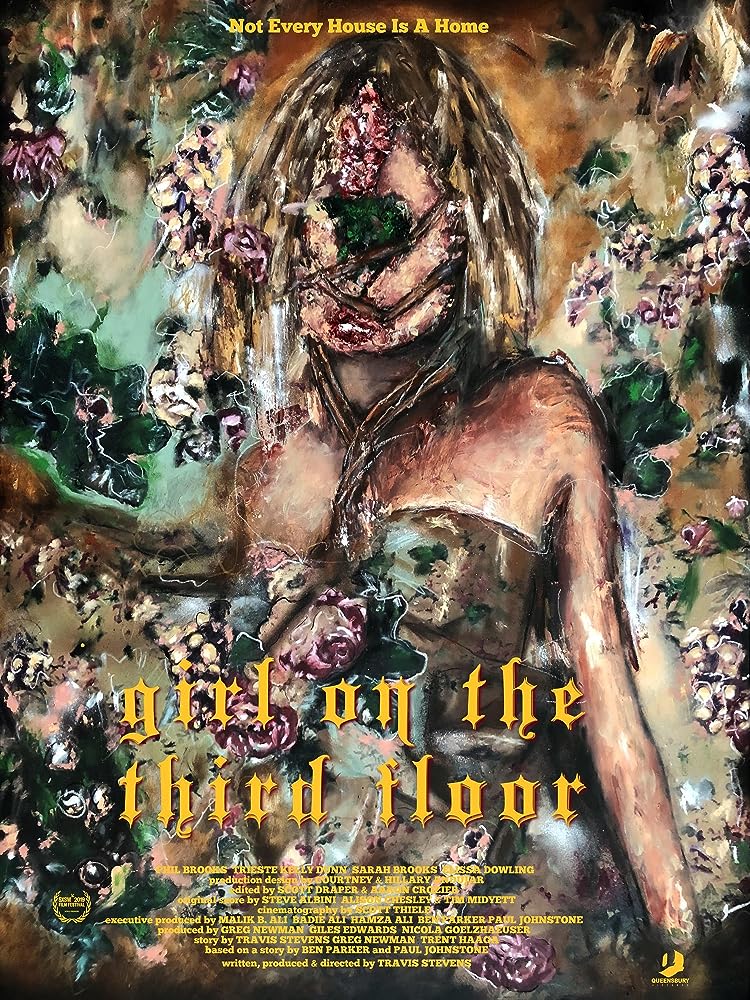 The idea of Phil Brooks, best known to wrestling fans as CM Punk, going into acting is one that makes a lot of sense at first glance. WWE has been the launch pad for countless actors who started out as pro wrestlers, the most successful being Dwayne Johnson but also including Hulk Hogan and John Cena. It makes sense; after all, pro wrestling is staged, with scripted storylines and outcomes, so to put on a good show, you need guys who can act as well as they can fight. The thing is, when they set out to make the leap from WWE Superstars to Hollywood movie stars, they typically go into roles that would serve as a logical leap for guys whose day job is to perform daring stunts and talk smack on a weekly basis: namely, action movies. Johnson started out with The Scorpion King and went on to become this generation's Schwarzenegger, while Cena's first star vehicle was titled The Marine and had him play, well, a Marine. Brooks, on the other hand, did Girl on the Third Floor, a supernatural horror movie that, while it gives him plenty of opportunities to walk around shirtless and show off his muscles, doesn't have him actually using them all that much; his character is a normal guy facing monsters who will get right back up if you throw them out the window.

However, other aspects of the movie made a perfect fit for Brooks. His in-ring persona was that of a straight-edge punk rocker who didn't drink, do drugs, or sleep around, and moreover, this reflected a lot of his real-life views on the matter. In other words, this film's morality play, in which a deeply flawed man who's backsliding into all the things that nearly killed his marriage and got him thrown in jail gets put through hell by a haunted house that preys on his vices, sounds right up Brooks' alley. The result is a film that, once I realized where it was headed, proved to be a solid trip, anchored by a pair of great performances from Brooks and Trieste Kelly Dunn mixed with some very icky and morbid imagery.

Our protagonist Don Koch is not a good man. He's a former banker who cheated on his wife Liz, defrauded his clients, and only avoided jail time (and saved his marriage) because of a plea deal and a promise to remain on the straight and narrow. Now, with a baby on the way, he and Liz are moving into an old, run-down house in the suburbs, Liz staying behind temporarily while Don renovates the place. There, with the house proving to be far more of a handful than he expected, his old vices start coming back: he starts drinking again, and gives in to the temptations of a sexy, flirtatious neighbor named Sarah. What's more, it turns out that the house has a history, having once been a brothel at the turn of the 20th century where the "girls" were routinely abused and worse. And the ghosts inside know that Don is a man vulnerable to temptation.

Brooks is the star of the show here, making for an extremely compelling protagonist as Don. He not only looks the part of a barely reformed criminal, he walks the walk, too, with Don quickly revealing himself to be an asshole underneath his button-down shirt. His crimes may have been financial rather than violent, but the film doesn't really care about that, and if anything, casting a big, jacked-up guy covered in tattoos to play a former banker does a great job juxtaposing the harm that "white-collar" crime does with that of street crime. That's all subtext, though, and the heart of Don's character is the fact that, despite all the problems he's caused for himself and those around him, he still can't seem to change his ways, and inevitably backslides into the bad habits when he's not under the watchful eye of his wife. Ellie, the pastor at the church across the street, and Geary, who runs the local bar/bowling alley, both make this clear as they deliver the exposition: for whatever reason, straight men in particular have a hard time living in that house. All of this is represented by Sarah, Don's seemingly innocuous side-piece who is revealed early on, and insinuated even before then, to be one of the ghosts haunting the house. Sarah was a pretty unique spin on the kind of ghosts normally seen in these kinds of movies, one far more sexually charged than most as she goes leads Don into temptation. Instead of a scantily-clad sexpot, Sarah puts on the image of the girl next door, a wolf in sheep's clothing who we quickly find out is evil, but who Don doesn't see coming until it's almost too late. Liz enters the picture in the second half of the film, and Trieste Kelly Dunn did a good job as the woman who follows her husband into what was once literally a brothel, managing both her feelings about Don having fallen off the wagon and her attempts to survive what the house throws at her now.

And the house has a lot to throw. Ghosts hide in the walls and the pipes, leaving behind both black gunk and a milky white substance that is implied to be all the jizz left behind by the johns who went to the brothel in its heyday -- which the film is more than happy to show oozing out of faucets, electrical sockets, and (in one really gross scene) shower heads. Supernatural viscera sits behind some of the walls, only to then vanish. The film has little of the in-your-face, CGI-augmented contortionist ghosts of, say, the Conjuring films, but it's not a film that's interested in playing coy with the viewer, either, and the messy nature of the hauntings gives it a gross feel that meshes well with the disgusting things and frequent spillage of bodily fluids that went on in the old brothel.

Girl on the Third Floor is a meaty, messy horror movie anchored by a great breakout role from somebody who will probably go on to be as memorable as an actor as he was as a wrestler. It's willing to be daring and gross, and it did its job remarkably well.

Second film of the night was a modern-day retelling of Frankenstein -- and not the first one they've shown at this festival, either, or the last. Apparently, last year was the 200th anniversary of Mary Shelley's original novel, and now, all the movies inspired by that milestone are hitting theaters. This one is the famous indie B-movie maker Larry Fessenden's take.

Depraved is a flawed, but altogether enjoyable, homage to Frankenstein that brings the story into the modern day, against the backdrop of the pharmaceutical industry and Silicon Valley "biohackers" who think they know more about science and medicine than actual scientists and doctors. As in many takes on the concept, including Shelley's original, the monsters themselves are never where the problems start; no, that would be with the people who created them. It isn't interested in a whole lot more than homage, but it delivers both a compelling monster and mad scientist and gives them both interesting journeys to go on, and the homages themselves, and the twists on the original story, were also fun to watch, so I wound up having a good time overall.

We start with a prologue in which a man named Alex, after going through a rough patch with his girlfriend, is suddenly stabbed to death in the middle of the street by a mysterious man, who then takes his corpse back to a lab set up in a warehouse in Brooklyn. This opening victim helped contribute body parts to a Frankenstein-esque creature, a reanimated man with little memory of who he was. His creator, a scientist named Henry, gives him the name Adam and starts teaching him basic skills while his financial backer, a tech-bro named Polidori who wants to "disrupt" the medical establishment, introduces him to both higher culture at the museum and lower culture at the strip club. As a result, Adam eventually gets curious as to who he is, and upon learning what Henry and Polidori did to create him, he proceeds to rage against his creators.

If you know how the Frankenstein story plays out, you'll mostly be able to figure out where this movie is going. It knows this and wants you to know it, being filled as it is with shout-outs to both the novel itself and to Mary Shelley and the people in her literary circle. Fessenden may be known for schlock, but he's not stupid, and he pays loving tribute to his inspirations in everything from the names of characters to a shot during the climax designed to homage the classic Universal adaptation. The cast isn't remarkable, but there weren't any weak links, and the effects on Adam manage to evoke the classic imagery of the Boris Karloff monster (stitches and all) while remaining unique and modern-looking in their own right, rather than just copying Karloff.

The film's focus on homaging the original does, unfortunately, work against it from time to time. Towards the end of the film, I thought it would be heading in a different, more interesting direction than it actually did, as Henry's affection for his creation starts to run into the fact that Adam is killing people. The character of Lucy, Alex's girlfriend from the intro, felt like she would become more important than she actually was -- and furthermore, the bit where Lucy recognizes Adam as Alex, her late boyfriend, becomes a major plot hole when we later find out that it was Alex's brain that was taken, not his entire head. (Logically, it should've been the other way around, with Lucy possibly causing memories to come back for Adam/Alex while Lucy has no clue who he is.) The film's attempts to modernize the story with satire of modern tech culture were welcome, but unfortunately, they felt hollow, and the film never really went into the depth that it could have. Polidori is presented as a parody of guys like Steve Jobs and Elon Musk, between his black turtleneck and his ideas about showing the dinosaurs of science and medicine what a real innovator can do, but he was a pretty bad parody, one who felt one-dimensional and existed largely as an antagonist for Adam and Henry.

It's a pretty shallow movie that doesn't do nearly as much with its story and ideas as it could have, but it's still a fun Frankenstein homage packed with a lot of heart and affection for the source. Check it out on Redbox.
Posted by Kevin R. at 2:42 PM