Rated PG-13 for disturbing thematic content and behavior, violence and some language 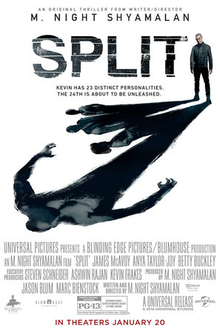 Let's get one thing out of the way right now. Split's portrayal of its villain's mental disorder is so unrealistic that it's almost laughable. I wasn't personally offended by it the way I was by the ending of Lights Out, but I can see where somebody who's grappled with dissociative identity disorder, or who knows somebody who has, can be. Real-life doctors have already voiced their criticisms of the film's science, as have advocates for people with mental illness. Me? I was just disappointed that Shyamalan relied on what, in practice, felt like a reheated version of the old "10% of your brain" myth that, by this point, is basically the standard way in which Hollywood doesn't understand neuroscience; I was literally waiting for Betty Buckley's psychiatrist character to use those exact words. I've always believed that, barring its creator voicing such opinions in real life, unfortunate implications in a story come down to lazy writing more than anything; in this case, it was lazy research. As somebody who's not particularly knowledgeable about the subject and doesn't have much of a personal stake in it either way, I'll leave that to others and just mention that, if you or somebody you know has ever suffered from mental illness, there are some late-game plot twists in this film that might hit too close to home.

With that being said...

Split proves that The Visit wasn't a fluke. While M. Night Shyamalan may not be back at the top of his game, he's definitely left behind the days when he was seen as the definitive case of an overhyped filmmaker squandering the potential he showed early on. Returning to his roots in low-budget horror films and thrillers proved to be exactly the creative kick in the pants that he needed, and he delivers a solid, intense little film with great performances, real scares, and a number of twisted tricks up its sleeve that help to make up for its utter mangling of the science behind its villain's main quirk.

Said quirk, of course, is that Kevin Crumb, our villain, has a pretty severe case of dissociative identity disorder -- or in layman's terms, a split personality. Specifically, he has 23 separate personalities living inside him, including an obsessive-compulsive neat freak named Dennis, an uptight, religious British woman named Patricia, a fashion designer named Barry, and a nine-year-old boy named Hedwig. They collaborate to kidnap three teenage girls, Casey, Claire, and Marcia, in order to sacrifice them to "the Beast", Kevin's buried 24th personality waiting to come out, a primal monster that lives to hunt and kill. Meanwhile, Kevin is being treated by Karen Fletcher, a psychiatrist with radical ideas about dissociative identity disorder; namely, that people with this disorder are capable of physically altering their body chemistry as they switch between their personalities. For example, a man who has a Russian bodybuilder as one of his identities can suddenly gain super-strength when Ivan comes out. (As for the Beast...) Not knowing that Kevin is a kidnapper, Karen seeks to use him to prove her hypothesis.

Knowing who made this film, and knowing that there was a twist coming (though, unlike The Visit, this one wasn't spoiled for me), I spent the entire movie with one eye open for Shyamalan's usual tricks, and thought for sure that I knew what the twist would be. Fortunately, I turned out to be wrong, and even more fortunately, this isn't a film that's dependent on its twist. While the ending is an exceptional treat for longtime fans of his, the actual meat of the film is a straightforward thriller about two people in a dangerous cat-and-mouse game. Anya Taylor-Joy, between this and The Witch, proves to have a real knack for the horror genre, with her Casey making for a troubled and resourceful protagonist whose backstory turns out to have a lot of resonance with that of her captor. Betty Buckley is also enjoyable as Karen, the well-meaning but out-of-her-depth doctor who's more interested in using her patient to prove her thesis than in actually helping him and the people he's hurting. The greatest props, however, go to James McAvoy. Here, he's essentially pulling off the same task that Tatiana Maslany does with her performance(s) on Orphan Black, effortlessly switching between his character's multiple identities and even having one of them impersonating the other in one scene. You never forget that they all live in the body of the same man, but McAvoy does an outstanding job bringing them all to life, and when combined with his character's backstory, they create an excellent portrait of a deeply troubled and even tragic figure. This is McAvoy's show, and he pulls it off with flying colors.

Shyamalan's direction does a similarly exquisite job in creating a mounting atmosphere of dread, even if his writing here leaves something to be desired. The old-school Hitchcock influences that earned him so much praise when he was still young and fresh are back on full display here, right from the opening scene that gets the ball rolling. When we spend the film trapped with the girls in the underground labyrinth that Kevin seems to call his home, we get an intense sense of claustrophobia. This is a remarkably well-shot and well-made film from a pure technical standpoint, giving the actors ample room to show their chops and running a chill down my spine even in a crowded theater with a gaggle of teenagers sitting next to me behaving as teenagers so often do in movie theaters. On the writing front, however, while I get what Shyamalan was going for, I don't precisely think he stuck the landing. A common thread running through his films is the old trope of "what doesn't kill you makes you stronger", the idea that experiencing suffering molds people into better versions of themselves as they overcome it. Here, Shyamalan takes this into some dark territory as he lays out both Kevin and Casey's backstories. While Kevin's side on its own would've made for a great subversion of that idea, as it turns him into a monster both figuratively and, eventually, literally, Casey's side touches on themes that, without spoiling anything, I don't think the film was fully equipped to handle. While Taylor-Joy does a great job bringing to life Casey's pain, the overall handling of the storyline pushed the film a bit too close to exploitation film territory, and felt rather jarring given the psychological thriller it had been beforehand. It was here, and not in the portrayal of mental illness, where I found the most to grumble about the more I thought about it.

And finally, we come to the big twist ending. Like I said earlier, the actual story doesn't really have a twist, instead slowly revealing new things about Kevin and Casey as it progresses until it reaches the climax. The "twist ending" doesn't pertain to the story itself (in fact, it was cut from early screenings of the film so as to keep spoilers from leaking) so much as it does to another Shyamalan film. I've never seen the film in question, but its fans seem to be ecstatic over it, and if the indication that it's building to a shared continuity between his films turns out to be true, well, I can certainly think of worse ways to do it. (Looking at you, DC Extended Universe.) Regardless, I definitely need to see the film in question, having heard so much about it over the years.

Split may not be that deft at handling the issues it tackles, but when it's delivering an intense, scary, slow-burn thriller, it shines. Shyamalan, it's great to have you back.
Posted by Kevin R. at 7:41 PM