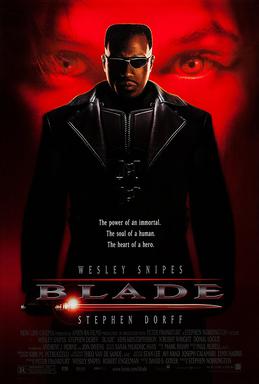 Blade is a pretty cool action-horror film that, to be perfectly honest, hasn't really stood the test of time. Don't get me wrong, Wesley Snipes looks badass in this movie, and he does a lot more than just look the part, kicking vampire ass at every corner. And it does hold a place in my heart as the first R-rated film I ever saw in theaters (thanks, Mom). Unfortunately, the CG effects have aged extremely badly, and while the action is cool and well-shot, it's also ridiculously overstylized. Fortunately, standout performances, creative twists on vampire lore, and storytelling that doesn't insult my intelligence too badly helped make this an entertaining romp whose two-hour runtime seemed to fly by. It ain't a great action movie, but it's very good fun.

Our main character is Eric Brooks, aka Blade, a man born to a woman who was bitten by a vampire during pregnancy. As a result, he became a half-human, half-vampire hybrid, imbued with all the advantages of vampires (speed, strength, heightened senses) but few of their weaknesses (garlic, silver, daylight). He hunts vampires with Abraham Whistler, an older hunter who mentors him, builds his weapons, and helps him control his thirst, the one weakness he still has. One night, while out hunting, Blade encounters Dr. Karen Jenson, a hematologist who was bitten and, upon learning about the other world lurking in the shadows, seeks to use her knowledge to cure both her infection and Blade's bloodlust. Meanwhile, in vampire society, a young vampire named Deacon Frost seeks to overturn the staid traditions of the culture he is a part of, viewing the elder vampires as cowards hiding from their human "cattle" and instead wishing to lead a revolution that would put vampires on top of the food chain. Upon learning of Frost's plan, Blade, Whistler, and Karen work together to stop him.

The greatest strength of this film is undoubtedly the cast that it boasts. Wesley Snipes leads the pack as Blade himself, a man who's as cool and badass as they come. When he throws down with the vamps, he displays a violent physicality, never once letting his demeanor crack. Kris Kristofferson also played it cool as Whistler, an older man who looks and acts like he's spent his whole life in roadhouses and bars, as did N'Bushe Wright as Karen, a less showy role but one that still offers her plenty of room to shine. How many hard-R action movies afford "the chick" the opportunity to kick ass and save the day with the best of them? Not many, but Blade certainly does, and Wright easily holds her own in both brains and brawn. The true standout, however, was Stephen Dorff as the villain, Deacon Frost. Dorff was clearly relishing the opportunity to play a character like this, a young, flashy punk upstart who rebels against his culture in his quest for power. Dorff stole the show every time he was on screen, making for an excellent bad guy who I loved to hate. How come this guy didn't have a bigger career?

Likewise, this film has all sorts of fun taking a lot of the "rules" of vampires, as laid out by everyone from Bram Stoker to Anne Rice, and playing with them like a kid in a sandbox. When Deacon Frost looks at his fellow vampires, the lengths they take to uphold "the masquerade" (i.e. keeping themselves hidden from humanity), and how they've become pale shadows of their past menace in the process, he viciously mocks them, reminding them that there was once a time when they were fearsome monsters -- something that rings even truer today in this post-Twilight era. The power of sunlight to kill vampires comes not from its holy fire, but from its ultraviolet rays (the same things that give us tans, sunburn and melanoma), which translates to Blade and Karen using a heat lamp to torture a vampire, Frost putting on heavy sunscreen to go out in the day, and Frost and his goons watching the sunrise while safely clad head-to-toe in full motorcycle gear. Cans of pepper spray are loaded with silver nitrate and garlic. And in Karen's quest to find a cure for vampirism, she discovers that an anti-coagulant drug used in hospitals has... explosive effects on vampire blood, producing some very messy kills when it's injected into one of them. A lot of these twists may be passe nowadays, but outside the realm of pen-and-paper RPGs, this movie is among the first mainstream places I can think of many of them showing up. Props to the writers on that front.

What I can't congratulate as well, on the other hand, is the special effects team. The CGI on display in this film would've been hilariously bad even by the standards of 1998, and today, it looks like something out of a SyFy original movie, not a theatrically-released film with a $40 million budget. It looks barely better than a cutscene from a video game, especially when it's trying to do liquid blood, which winds up looking like globs of Jell-O. And while the action scenes were well done, they came with a huge "but": stylistically, they have not aged well one bit. This is most apparent in the music, a mish-mash of '90s industrial metal and techno that sounds like it was lifted from The Matrix (which actually came out a year later, but still). It must've sounded so hip and cutting-edge at the time, but now, it feels like they were trying too hard to make a dark, edgy action flick, and it comes across as a bit phony in hindsight. Finally, I must note a serious hole in Deacon Frost's plan to take over the world: if he turns everybody into a vampire, then where do they get their blood from?

The years have not been kind to this film, but that doesn't stop it from being great fun to watch, warts and all. It's definitely a cult classic at best, but it's definitely better than a lot of the blockbusters from that period of time.
Posted by Kevin R. at 11:30 AM