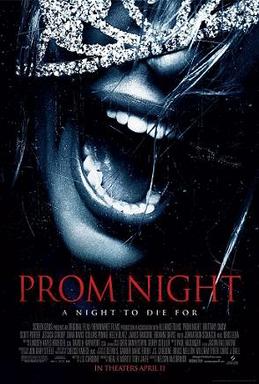 I've never seen the original 1980 slasher flick Prom Night, but I do know that it has a fairly middling reputation. While a hit in its time, it's the sort of film that, while still remembered by horror geeks, is remembered solely because of the people associated with it; in this case, it starred Jamie Lee Curtis fresh off the success of Halloween, as well as Leslie Nielsen playing her father, who's also the principal. Its in-name-only sequel Hello Mary-Lou: Prom Night 2 (short version: pretty much A Nightmare on Elm Street meets Carrie), as cornball as it is, actually holds a slightly better reputation than the original does. In other words, the 1980 Prom Night is the perfect sort of film to remake. And on paper, the remake we got tried to do everything that a good remake should: it started out with a film that could've been done better, it put its own twist on the story, and it combined it with a modern teen drama storyline in an attempt to give us characters to care about. All they had to do was place it in competent hands, and it should've had no problem outshining the original and potentially becoming a classic.

Unfortunately, they completely botched the execution.

There's a reason why, in spite of everything I just said, the 2008 version of Prom Night is still remembered as one of the go-to examples of how not to remake a horror film. Going in knowing its reputation, I wondered if it could really be that bad, but this film proceeded to very quickly shut me up. This is a terrible movie, its few decent elements rarely rising above mediocrity and winding up drowned under the weight of everything else. Worst of all, though, it's not even the sort of bad movie that attains badness through sheer laughable incompetence. Rather, it commits the worst movie sin of all: being flat-out boring through terrible pacing, dull acting, and awful scares and kills.

Let's start with the characters. Our ostensible protagonist is Donna, played by Brittany Snow, a teenage girl who, three years ago, saw her teacher Mr. Fenton (Johnathon Schaech) murder her parents and her younger brother due to his obsession with her. Mr. Fenton was thrown in the loony bin, while Donna has begun picking up the pieces and is now preparing for her senior prom with her boyfriend Bobby and her BFFs Lisa and Claire. Unfortunately, Mr. Fenton just broke out of the asylum and is coming back to Bridgeport to reclaim his lost love, and murder anyone who gets in his way. The biggest problem with the plot is that, outside of his confession/statement of love to Donna upon being arrested in the prologue, we get no development for Mr. Fenton establishing him as a stalker. The whole movie, he behaves like any other slasher villain, the only difference being that he doesn't wear a mask and occasionally converses with his victims. His platitudes to Donna at the end about how "now we can be together", and his deleting photos of her and Bobby on her camera, ring hollow. Why is this guy stalking Donna? How did his obsession with her begin? We get no answer to this, no look at what this guy was like before he went crazy. This is a big problem, given that the film wants to make a killer with a backstory that we should care about, somebody who's a bit more than the usual faceless, voiceless killers we get in movies like this. As a result of this film half-assing it, I couldn't buy into the killer's obsession one bit.

Next, we get into Donna. Now, I'm sure Brittany Snow is a fine actress in other films, but here, she's either dull or hideously overacting. Then again, even a good performance in the role wouldn't have changed the fact that Donna is one of the worst final girls I've ever seen in a mainstream horror film. She makes mind-bogglingly stupid decisions like heading back into the hotel as it's being evacuated just to retrieve her shawl (yes, it's a precious memento of her mother's, but she still could've waited until the killer was caught, as the hotel wasn't on fire or anything), and whenever the killer has her cornered, she does nothing but scream helplessly rather than even try to fight back, always relying on someone else to save her. Jamie Lee Curtis would be ashamed of this girl. Most of the rest of the cast barely registers, with Idris Elba given little to do beyond play a gruff detective/fifth-rate Dr. Loomis wannabe, and most of the teenagers existing only to die horribly. The guy playing Donna's boyfriend was the worst of the bunch -- he was 28 years old at the time and looked every day of it, and he barely even tried to emote. His smiles to his prom date looked like they were pulled out of him.

And did I say "die horribly" up there? Scratch off that last descriptor, because the only horror here is in just how incompetent and defanged the kills here are. The buildups are occasionally passable; one scene in an under-construction section of the hotel was particularly creepy (even if it's strange why she didn't just continue on to the ground floor), while I liked the concept of one guy drunkenly looking for his jilted girlfriend (not realizing she's already dead) only to find the killer waiting for him, even if the execution left something to be desired. However, the deaths are all the same: the killer jumps out and stabs someone or slashes their throat with his knife, with a minimum of blood being shed. I saw the unrated version on DVD, and I swear, there's nothing in this film that would've really pressed an R rating. It's pretty much a PG-13 slasher with a few more splashes of blood, maybe one or two more shots of knife wounds. The bodies don't even bleed out and get the red stuff all over the floor. It's as dry as the Sahara, and worse, it lacks any creative spark. (At least they let both the black guys live, for a change.)

Finally, we get into the pacing. Even at 89 minutes (counting the credits), this film dragged. Huge sections of the first two acts are devoted to the worst sort of CW/ABC Family wannabe teen drama subplots, the film seeming to forget that it's a horror movie. Pretty Little Liars is scarier than this; at least that show's entire plot is built around a central mystery, while this film just runs around and asks us to care about a bunch of woodenly-acted ciphers whose stories serve no purpose after their deaths and are dropped entirely in the third act. I still don't understand what the point was with the bitchy girl Crissy, who's competing with Lisa to become prom queen, and who drops off the face of the Earth without even supplying another kill for the tally. (What kind of slasher film doesn't kill off the mega-bitch and give her the most howlingly brutal death in the film? Oh, right, this one.) This is time that should've been dedicated to developing the killer and Donna as characters, rather than leaving them as blank slates like they were. As bad as the first hour was, though, it's still better than the third act. What should be the most exciting section of the film instead brings what was already a painfully slow movie to a complete halt as it leaves the palatial, gothic confines of the hotel (one of the few things this film got right was its beautiful, lavish set design) and moves into Donna's house. The film lost whatever tiny scrap of sympathy it still had, leaving me wondering when this piece of garbage would finally be over as it steals ideas from better films and then does nothing with them except drag things out while occasionally remembering to throw some jump scares at us. A full fifteen minutes pass without us ever seeing the killer or one of his victims!

This film will probably be more remembered than the original, but unfortunately, it will be for the worst possible reasons. This is every stereotype of toothless Hollywood teen horror rolled into a single tasteless ball of mush, and a ninety-minute lesson on how not to make a slasher flick.
Posted by Kevin R. at 4:40 PM