If you thought it was over, think again. Now that I've cleared the "main" series Nightmare movies, capping off on Sunday night with a rewatch of Freddy vs. Jason, it's time for the spinoffs. First, we have Wes Craven returning to his most famous creation...

Rated R for explicit horror violence and gore, and for language 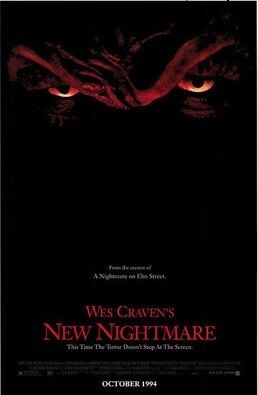 Today, Wes Craven's New Nightmare is a curiosity, usually known for one of two things: a) it's Wes Craven going back to the Nightmare series, and b) it's the one where Freddy Krueger breaks out of the movies and starts haunting the "real world". It's a shame, because New Nightmare is easily the smartest film in the series since the original. It's a prototype of sorts to Scream, which Craven made two years later, lacking that film's sense of humor but still possessing its fourth-wall-breaking "meta" tone and its exploration of what the slasher films of the '80s (particularly the Nightmare series, in this case) had come to represent by the middle of the '90s. And from a pure horror standpoint, it's also the scariest film since the original, recapturing its trippy, dreamlike style as only Craven seems to know how to do (something even the better sequels failed at) while resetting Freddy to his old personality and giving him an updated appearance. While it's not perfect, New Nightmare is an all-too-frequently overlooked gem of a horror film, one of the three Nightmare films (together with the original and Dream Warriors) that I would immediately recommend to anybody interested in the series.

New Nightmare takes place not in Springwood, but in Hollywood, where Freddy Krueger was cooked up in Wes Craven's nightmares. Heather Langenkamp (playing herself), having long ago moved on from slasher films to television, now lives in a modest, upper-middle class suburban home with her husband, special effects artist Chase, and her son Dylan. Unfortunately, she's been receiving strange phone calls and letters from a deranged fan posing as Freddy (or is he?), and now, her son has started sleepwalking while mumbling the famous "one, two, Freddy's coming for you" nursery rhyme from his mother's old scary movies. As it turns out, Wes Craven has started writing the script for a seventh Nightmare movie, once more informed by his nightmares; he reveals to Heather that, by writing the original film, he had captured an ancient spirit and locked it in the world of fiction. Unfortunately, with the Nightmare series having self-destructed, the evil spirit is escaping into the real world. It's been trapped in the Nightmare series for so long that it believes that it really is Freddy Krueger, and since Heather played Nancy, who had defeated Freddy twice in the movies, this spirit believes that, to fully regain its power, it must kill its on-screen nemesis for good. To defeat the spirit and save her son, Heather must play Nancy one last time, this time for real.

The writing is both the film's greatest strength and its greatest weakness. As you can probably guess from the above plot description, this is probably the weirdest film in the series since Freddy's Revenge, and quite possibly even weirder than that. That's without even getting into the possibility that all the events in the film are predestined to happen, having all been scripted by Craven beforehand. (Seriously, there's more than one scene where Heather reads the events of the film from Craven's script as they happen around her.) It's a very bizarre film, especially in the second half, and one that I'm still second-guessing. On one hand, it only adds another layer onto the unsettling "is this a dream or reality" feeling that so frequently rears its head throughout the film, especially since the film incorporates many real-life events into its plot. Langenkamp really is married to a special effects artist (and has since gotten involved in that business herself), she really did deal with an obsessed fan who sent her threatening letters after the cancellation of Just the Ten of Us, and the 1994 Northridge earthquake was written into the story (with earthquakes becoming a recurring motif) after it happened in the middle of production. On the other hand, the story works a lot better in the abstract than as anything concrete. If you try to get everything straight in your head, you will inevitably run into plot holes, especially in the second half of the film.

Taking the story as a metaphor makes things flow much better, especially since this film has a lot to say about movies, how they impact our lives, and the line between reality and fiction and how some people have a hard time separating the two. Heather's past as a "scream queen" means that she frequently worries about when it would be appropriate to introduce her son to her most famous films, especially given that, as she points out, Freddy has become a pop culture icon like Santa or King Kong. Freddy, meanwhile, has been literally brought to life by people's belief in him... or has he? A lengthy passage in the middle of the film, where Heather runs to the hospital to check up on Dylan, has the doctor speculate that the pressure of her stalker and the earthquake, combined with the tenth anniversary of A Nightmare on Elm Street, has caused her to snap and start seeing Freddy everywhere, from her son's sleep disorder to her husband's death in a car wreck after falling asleep at the wheel. The scenes where Heather finds the script for Craven's film, which details the events that have been going on in her life recently, only adds to the mind-screwery. Like I said, it's hard to make sense of it except in the broadest strokes, but it works great as metaphor.

Also working great are Langenkamp and Robert Englund in the roles they were born to play -- themselves. Langenkamp is great as a frazzled mom who's watching her life quite literally come apart, slowly going over the edge as she realizes that the monster of her movies is attacking her for real, while Englund plays both himself and Freddy, and does both wonderfully. His performance as himself is miles away from Freddy -- a genuinely jovial guy who loves his work and who you couldn't imagine hurting a fly -- which makes the contrast with Freddy that much greater and more terrifying. Furthermore, the film keeps him lurking in the background for most of the first half, giving the film time to build up to his big arrival, whereupon he's at his scariest since the first film. His burn scars are more pronounced, he wears a trench coat over his sweater, but most importantly, he's no longer a joker. Oh, he still makes a few puns, but now they sound like cruel insults added to injury, and also add more fuel to the long-rumored implication (which became explicit in the remake) that he's a child molester in addition to a murderer. The only thing I wish was that they had a scene where Englund and Freddy are on screen together. John Saxon also returns as both himself and Nancy's dad, the latter in one of the film's best scenes, and it was great seeing him and Langenkamp reunited. The kid playing Dylan, though, oftentimes came very close to the line between scary and campy. For the most part, he stayed on the right side of the line, but his screams sometimes crossed it. The same thing is true with many of the people playing themselves (including producer Robert Shaye and Craven himself), though fortunately, they don't get enough screen time to annoy me. (Craven apparently originally wrote a scene where he cut off his eyelids to stay awake, but he didn't think he had the acting chops to pull off such a scene.)

The quality directing doesn't stop with the film's slow buildup to Freddy and his scary new look and return to his old persona. On top of that, it recaptures something that the series hasn't seen since the last time Craven was in the director's chair: ambiguity. I already spoke at length about how weird the writing can be, but the film's style once again frequently left me guessing just when Heather was actually awake and when she was still dreaming. And even in the real world, she's not quite out of the woods, as witnessed during the highway scene. Same thing with the frequent shout-outs to the original film, which were never so blatant as to detract from the story or the scares but were always very fun to recognize.

Perhaps the closest comparison I can make for New Nightmare is that it's the arthouse version of a Nightmare film. It's very strange and abstract, and it doesn't quite work all the way through as a story, but it's also the scariest, most thoughtful film in the series since the original. This, in my opinion, is the true finale to the Nightmare on Elm Street series. A return to form, and a great swan song.
Posted by Kevin R. at 2:12 PM